Neoliberalism – The Elephant in the Room
Michael  McGetrick

More and more people are becoming aware that, over the past twenty five years or so, an economic dogma known as neoliberalism has been responsible for drastic changes in their lives and that of the nation states to which they belong. Although neoliberalism has benefited some, a great many – in the West at least – have lost out on an economic orthodoxy that has failed to deliver in terms of personal prosperity and life aspirations. It is an economic orthodoxy that has done untold damage to once-thriving communities in industrial towns and cities across the Western world. It is a system that is transforming a once stable workforce with well defined company benefits to that of a precariat class in a gig economy with little or no benefits. It is an ideology that seeks to transform everything in its path – including individuals – into competitive commodity units. An unfortunate side effect is that it dehumanises many to become self-centred individuals who value their fellow human beings only for the size of their pay packet or bank balance. What follows is the story of how the neoliberal dogma attained ascendency in the latter part of the twentieth century.

National economies in the post Great Depression years (from around the late 1930s to the early 1970s) reflected the Keynesian model of economics that was adopted by all major governments in the West. This was done to reverse the damage done by the stock market crash of 1929 which was brought on by a highly unregulated laissez-faire market; we think particularly of the New Deal programs initiated by President Roosevelt in the United states to alleviate the devastating poverty and unemployment. The post Great Depression years were marked by strong economic growth and low unemployment, accompanied by significant reductions in inequality between the poorest and richest in society. In economic terms, it heralded the era of the American Dream. Indeed, by the late fifties, the economic mood was captured by British Prime Minister Harold MacMillan in his “we’ve never had it so good!” speech.

And then, it all appeared to go wrong.

The boom years were suddenly replaced with low growth and high inflation – otherwise known as stagflation. The seventies are remembered for strikes and industrial turmoil caused by workers striving for large wage increases. Many can recall the images of chaos during the so-called Winter of Discontent of 1978-1979, when mountains of rubbish were left uncollected on the streets and bodies left unburied due to widespread strike activity. Left wing extremism – in the guise of the so-called ‘Miltant Tendency’ – began to gain control of the British Labour Party, leading to the defection in 1981 of the moderate ‘Gang of Four’ grouping to form the Social Democratic Party. The meme that inevitably formed in the minds of the general public was that of economic chaos and disorder due to lawless trade unions intent on ‘holding the country to ransom’.

Yet, it is easily forgotten that all of this happened against the backdrop of two major events that occurred earlier in the decade. Firstly, the abandonment of the Bretton Woods system, which pegged all currencies to that of the dollar reserve currency (itself fixed to gold at a price of $35 dollars an ounce). In the coming years, the ‘fiat’ dollar would lead to a growing wave of credit and monetary expansion. Secondly, the ‘Oil Shocks’, when oil producing countries through OPEC hiked the price of oil massively. Both of these events unleashed large inflationary pressures that led to inflation levels that would eventually peak around 25%. Inevitably, the labour movement would aggressively campaign for higher wages in order to keep living standards intact. A spiral of wage increases and price increases resulted, causing further economic stagnation. There appeared to be no ready answer to the problem.

In panic, the politicians became seduced by the cheerleaders of a new economic dogma called neoliberalism. They preached that the Keynesian model had failed; it could not provide solutions to the spiralling, runaway inflation problem. TINA – There is No Alternative – became the new mantra to justify the neoliberal model. This new economic brand â which became known as Reagonomics in the USA, and Thatcherism in the UK – was adopted as the miracle cure to replace Keynesianism – the economic dispensation that had been so successful in delivering prosperity for all after the Great Depression years. In reality, neoliberal economics was simply the pre-Keynesian economics of laissez-faire â unfettered free markets, deregulation, and a limited role for government. There was nothing new in neoliberalism, excepting that is was to become laissez-faire capitalism on steroids, targetting a much wider market place; the era of globalisation had begun.

As neoliberalism kicked in, governments became increasingy indifferent to the plight of millions of unemployed left on the scrapheap, as their industries were allowed to die off (or be sold off to the highest bidder). Sound bytes from ministers became increasingly cold. âGet on your bike!â was the cry from former Employment Secretary Norman Tebbit in an attempt to persuade people to uproot themselves from their communities to new locations. Indeed, in the early eighties, as the official unemployment figure soared to over three million, many people âgot on the planeâ, to find employment opportunities abroad – a sort of mini British diaspora. As the eighties progressed, re-privatisation of nationalised concerns and outsourcing of government services (at both central and local level) became the order of the day. Criticism did come, though, from unexpected corners. For instance, former Tory Prime Minister Harold Macmillan described the Thatcherite privatisation policies for nationalised industries as akin to ‘selling off the family silver’.

The graph below depicts dramatically the effect that neoliberal economics has had on global income distribution over much of the past twenty five years or so – specifically, for the time window of 1988-2008 (1). I like to call it the âElephant Curveâ – the left hand side representing an elephant’s rump and the extreme right hand side representing its trunk. 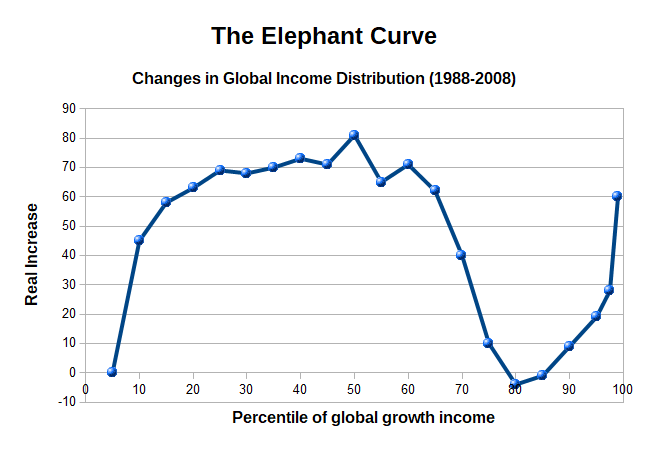 Not all of the story told by this graph is bad. The rump of the elephant on the left hand side represents increased income for large parts of the developing world (such as India, Brazil) where capital was moved. Sadly, much of this improvement has been exploitative in nature with many workers working under sweatshop conditions.

However, the rise in income for the developing world has been mainly achieved at the expense of workers in the developed economies due to offshoring of manufacturing to countries where cheap labour can be exploited. This is illustrated in the U region of the graph (between roughly the 75th and 90th percentile). Workers have seen little or no improvement in their income and wealth, with many experiencing real reductions in income after adjusting for inflation. The offshoring of manufacture to the developing world from countries such as the UK, USA and Japan has created much damage by way of unemployment, and the economic ruin of towns and cities (and the communities that come with them). We specifically think of the Rust Belt towns such as ‘Motor Town’ Detroit and the steel producing Gary in the USA, and many of the former northern powerhouse towns of the United Kingdom. Paul Craig Roberts, former Assistant Secretary to the Treasury under the Reagan administraton, and former associate editor of the Wall Street Journal provides a comprehensive account of the American situation in his book The Failure of Laissez Faire Capitalism. Roberts describes how jobs in engineering, research, software and information technology followed the manufacturing jobs exodus via the offshoring process, and skilled labour in these sectors were imported into the country at lower renumeration in an effort to keep costs to a minimum. The result is an army of well-trained American graduates in science, engineering and other subjects unable to find employment, and an economic transition to a low-paid service economy. The same dynamics have played out in the United Kingdom and much of Europe. The ‘American Dream’ has become an illusion for most people. The Western middle class, particularly in the United States, is severely economically compromised and reduced in size.

The real winners, of course, are the 1% – represented on the far right of the graph (the trunk of the elephant) – where wealth increases have been accrued due to massively increased profits as a result of significant lowering of the global labour wage bill. Rather than the ‘trickle-down’ economics, as promised by the neoliberals, the world has experienced ‘hoovering-up’ economics, where wealth has been sucked away from the 99% into the hands of the 1%.

Of course, the system could not last. Reduced consumer demand, due to stagnant wages and higher levels of unemployment, encouraged the banks to provide easy credit. This, and deregulation of the financial markets, led to the financial crash of 2007-2008. Too-big-to-fail banks were bailed out by taxpayers at the cost of austerity measures for the majority of the population. The neoliberal orthodoxy, and the economic and social destruction it has caused to Western economies, is the elephant in the room that our governing politicans still refuse to acknowledge; they simply wash their hands and recite ‘markets know best’.

So, did the Keynesian system really fail during those dark days of the late seventies, or was the industrial turmoil the excuse the corporate elites needed to convert politicians to their cause, and revert to type? Inflation had to be controlled. Probably, a short period of monetarist policies were required to stem the spiralling inflation cycle. Indeed, William Poole, former member of the US Federal Reserve interest rate-setting committee, blamed the inflation of the 1970s on over-expansionary monetary policy, not oil shocks. It is interesting to note that industrial action (for which the United States had its fair share) is not cited as the main cause of inflation. It would appear that easy money expansion by the Federal Reserve and the banking sector worldwide, not Keynesianism per se, led to the economic stresses of the late seventies.

Recent expressions of public anger should be a wake up call to politicians. We think of the vote for Brexit, the election of Donald Trump in America, the protests of the ‘Yellow Vests’ in France and the increasing Euroscepticism that is gaining ground throughout Europe. All indicate that a majority of people are hugely unhappy with the economic status quo. The inevitable result of all of this must mean a return to a more equitable economic regime. Much damage has been done, and a lot of repair work is required. The sensible path is to return to Keynesianism. Also, for its own good, corporate governance needs to be revised in order to make it more accountable to the workplace. The German social democratic model of the workplace appears to be the most sensible. The principle of Co-determination (Mitbestimmung) allows for workers to elect work councils and to be represented on company boards. Such a system encourages an attitude of cooperation between shareholders and workers for mutual benefit. Consequently, during the seventies, Germany was comparatively free of industrial action compared to other Western nations and undeniably one of the strongest worldwide economies. If the United Kingdom possessed similar work place policies in the seventies it is unlikely that the severity of the seventies strikes, or infiltration of trade unions by left wing extremists, would have happened.

For those in the West, the neoliberal economic model has inflicted much damage on individual standards of living, significantly increased levels of unemployment and indebtedness and the severe undermining of the welfare state and social cohesion. The shocker is that such damage could have been inflicted within such a short period of time – less than a generation. The sooner it is discarded, the better.