Michael was born and raised twenty miles north of London, in Hertfordshire, where he received his primary and secondary education. During this time he came to love both the Hertfordshire countryside (where he cycles), and it’s close proximity to London. Michael continued his studies at London University (Royal Holloway and New Bedford College) where he completed a B.Sc(Hons) and PhD in physics. His doctoral experimental research was carried out at the United Kingdom Atomic Energy Research Establishment, Harwell, where he investigated the nature of defects – induced by phenomena such as metal fatigue, and nuclear reactor fission-induced damage – using the Doppler-broadened gamma radiation emerging from annihilating matter-antimatter pairs (electrons and positrons).

Outside of academia, Michael has worked in a range of industries within the electronics sector (in South Africa, the United Kingdom and Germany), providingÂ IT and software solutions to various clients in the military, government and corporate world. Examples include air traffic control, flight testing telemetry, and car infotainment systems. Michael has also spent time as Program Manager for the UK Electronics Alliance (now ElecTech) set up on the recommendation of the former Department of Trade and Industry Electronics Innovation and Growth Team Report (EIGT 2015) to address the challenges of the UK electronics sector during a period of rapid globalisation and fierce international competition.

Michael believes in utilizing science and technology in a way that maximizes its impact on benefiting mankind. Current interests include utilising the power of smart-phones for providing novel Apps (Android), and the relatively new sector of the Internet of Things for benefitting individuals and communities. 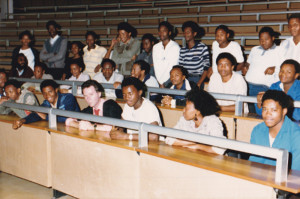 Michael with his physics students in South Africa

On a more general level, Michael believes that our current scientific paradigm should be expanded to include the realm of consciousness in order to accommodate mind-body dynamics. An important part of this development, as we progress through the 21st century, will be the consequences for self-healing. Indeed, in due course, this is most likely to become a significant component of the Alternative Living Technologies strategy that most Western governments are currently encouraging and pursuing.

For those who would like to find out more about Michael’s research, a summary of his Ph.D thesis may be found here.